Lenses distort images. The extent to which a given lens minimizes "unwanted" optical distortions is generally held to be one measure of its quality. For wide-angle lenses, barrel distortion and vignetting are two characteristics commonly measured.

Barrel distortion is an optical aberration resulting in the curvature of straight lines in the image as if it had been mapped onto a sphere. Barrel distortion effects become noticable when using wide angle camera lenses of 35mm focal length (35mm equivalent) or less and becomes more prominent as the focal length decreases.

One extreme example of such a lens was the f/8 15mm Carl Zeiss Hologon (1966) with a staggering 110° angle of view and minimal distortion. Owing to the extended rear of the lens group, it couldn't be mounted on an SLR due to the reflex mirror getting in the way. The lens was mounted on specially designed body by Zeiss Ikon and sold as Contarex Hologon Ultrawide in 1968. 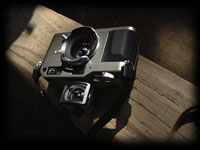 After the demise of Zeiss Ikon, a small number of remaining lens units were converted for use on Leica M cameras (1972). Since then it enjoyed a brief reincarnation in the early 90's as a f/8 16mm, for the titanium clad Kyocera Contax G series cameras.

In all their incarnations, their rarity value as well as the low barrel distortion characteristics earned Hologon its status as a legend. Despite this however, Hologon, as with many ultra wide angle lenses suffered from a serious flaw. Pictures taken with the Hologon exhibited a a very noticeable geometric light fall-off toward the edges of the frame, more commonly referred to as vignetting. To compensate for this weakness, a center graduated ND filter was supplied with the lens. It is revealing however that this smoke and glass contraption is rarely seen in photos of the lens.

More recently, a less obvious correction of optical aberration became apparent in the Panasonic Lumix DMC-LX3. Being one of the very few compact digitals ever made with a zoom starting at 24mm, respectably bright f/2.0 and RAW format support, it attracted some interest. The fact that it is mechanically identical to the Leica D-LUX 4 didn't go unnoticed either.

Some oddities became apparent when some users noticed that the 24mm external viewfinders from both Panasonic and Leica appeared to have significantly narrower field of view than the images captured on the CCD. Given the reputation for engineering excellence enjoyed by Matsushita Panasonic and Leica's aura of optical perfection this was a curious oversight. 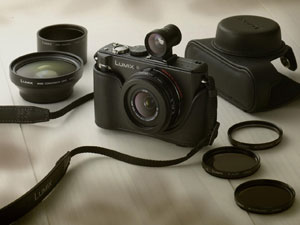 When the two cameras were introduced, there was a delay in support for the proprietary RAW files by Adobe Camera RAW/Lightroom and Apple's Aperture. An open source RAW file utility "DCRAW" was the first to offer support. It quickly became evident that the disparity in field of view between the viewfinders and CCD resulted when a third party RAW processor was used instead of the bundled software from Panasonic (SilkyPix Developer Studio 3.0) and Leica (Capture One 4). The resulting RAW image had a field of view closer to that of 21mm, compared to the 24mm on the viewfinders available from Panasonic and Leica.

On further investigation, it was discovered that the camera was correcting for barrel distortion of the lens in the on-board image processor in the camera for JPEG files. Since such corrections wouldn't be applied to RAW images, bundled image processor software from both Panasonic and Leica also applied the same correction barrel distortion. The process of correcting barrel distortion inevitably results in certain amount of cropping of the image. RAW images without Panasonic or Leica corrections lacked this crop and was causing the difference in the field of view between the viewfinder and RAW images.

The lens distorts and camera lies. The question is not about raw unadulterated truth in the age of Photoshop but whether Hologon's graduated filter makes it any less of a legend.