The first three images below were shot on two rolls of Rollei IR400 Infrared film with a Hoya R72 filter, Mamiya 645AFD body, and older Mamiya-Sekor 80mm 2.8 manual lens. One roll was processed in Wimberley Pyro and one in Acufine (both truly fine grain developers). I am pleased to say the results were from both developers were good to excellent, showing little graininess unless overexposed.. Both rolls shot the same scene, outdoors, late afternoon sunlight. NOTE: In these tests I did not use the IT focus red dot on the focus scale. 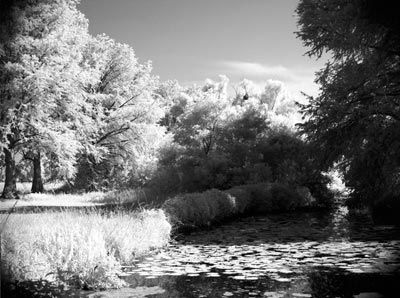 Acufine seems a bit more contrasty without any manipulation. 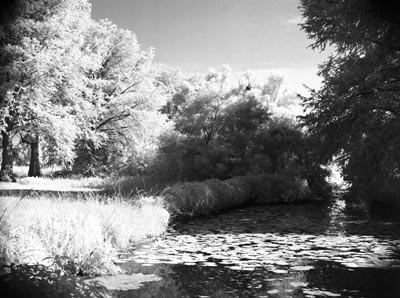 Pyro tends to have an ounce or two of magic in the bottles and the shadow detail and is simply like no other developer I have ever used. 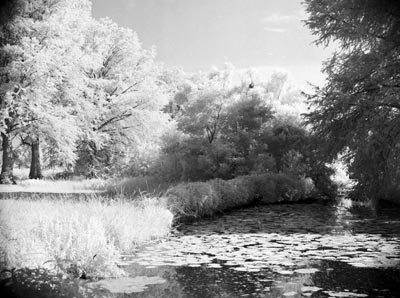 Rollei claims that overexposing the film can achieve an "HIE" look. They are right. This shot was exposed down one speed: 1/2 sec., at F8. Larger aperture will probably give more of the HIE look.

When using the 35mm film with #25 and #29 filters there was a lack of Wood effect. This wasn't much of a surprise, although I'd hoped for a little more of the effect. It's similar, in that aspect, to Konica750 or Ilford SX200 although a finer grain neg is possible (using fine grain developers) than either Konica or Ilford IMO.

The other more important issue was that I tried using an 820nm filter on a previous roll, but this didn't work as the film has no sensitivity past about 760-780nm therefore I got no images on the film no matter the aperture or speed. Sometimes Mfg. specs tend to be somewhat conservative or downright wrong about the sensitivity of any given film. In this case the Mfg. was right. I recommend using nothing beyond an R72 (720nm filter) on this film. 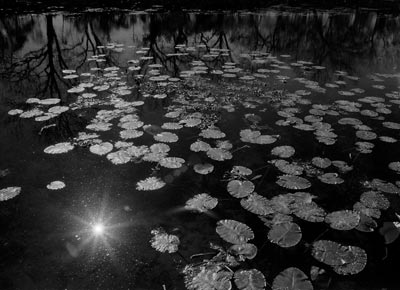 I haven't experimented much with the following but it may be that the Rollei is an excellent fine grain "normal" 35mm B&W ASA400 film which may mean a it could be a competitor to TRI-X. I was able to shoot at 1000th at F22 as seen in the image of Lillypads (above). This could be pretty serious and take the film beyond of the "HIE" competitor area. I mean imagine that, a fine grain ASA400 35mm film? I feel that this deserves more experimentation along those lines and recommend it for testing as such.

Note: All results have been provided by independent testers. Scans and images have NOT been manipulated.